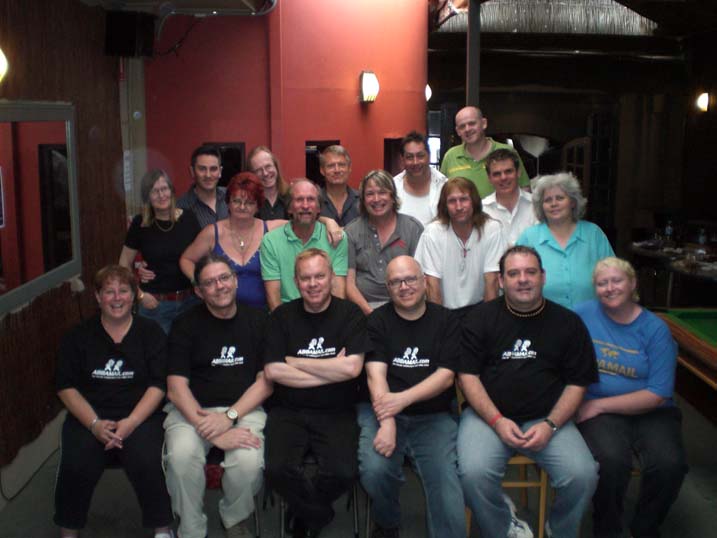 A dozen years ago I was part of a fairly dysfunctional and heavily moderated mailing list for ABBA fans run by a bloke called James Preston.

Although the vast majority of organised “hard core” ABBA fans are gay men there’s also a large number of fans who feel somewhat uncomfortable with that reality. When one too many posts about poofters were moderated out of existence on the old list, Graeme and Grant decided to set up their own. Not surprisingly there was an exodus from one list to the other.

Without doubt, the success of the list has been thanks to the efforts of Graeme and Grant. As much as I know they’ll deny it, a lot of the “personality” of the list came from the personalities of Grant and Graeme themselves. Whenever things were quiet on the list, Graeme could always be relied upon to stir things up. Whenever things got a little too rowdy, Grant could always be relied upon for a calming word or thought.

As ABBAMAIL celebrated Ten Years, the wonderful Norma Parker organised us all to make a contribution towards a series of gifts to acknowledge the contribution Grant and Graeme have made to ABBA fans over the years.

It was really nice to be part of that celebration, and to say a public “thank you” to two blokes who’ve contributed so much over such a long period of time, going right back to the days of the Australian ABBA Fan Club in the 1970s.

But after a series of brutal attacks by some of the organisations behind ABBA, including an attempt to close down the site, Graeme and Grant have decided enough is enough. Although they’ve declared they still like ABBA’s music, they no longer consider themselves ABBA fans. After thirty years, that’s a pretty big decision to make.

For me life will go on, and I still have their friendship which is great. But to be honest, I kinda worry for the more isolated ABBA fans. ABBAMAIL was important to me, but I’m pretty sure it’s been more important for those fans who are either geographically or socially isolated. Thankfully though, the list will continue in a new form, thanks to a wonderfully enthusiastic American called Kevin.

And life will go on, but it’s kinda sad that a lot of people who’ve come to know these blokes through an email list will lose that connection. I really love them both and I’m glad they’ve chosen to walk away with dignity. A bit like ABBA really… :)

Gosh it’s going to be interesting at the pub tomorrow night….