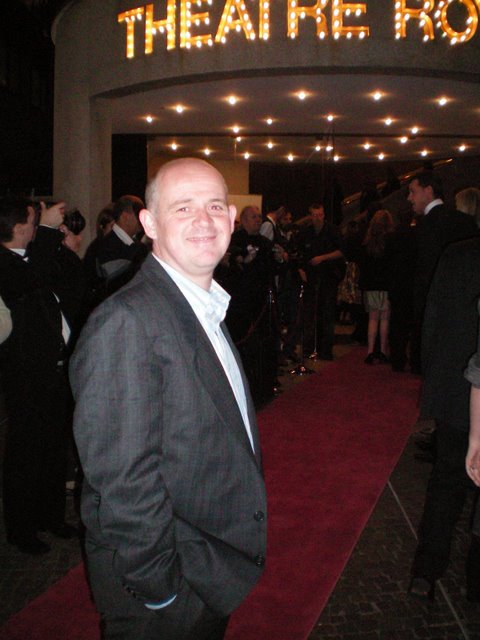 Can I take your photograph?”, the young woman said to me as I walked on to the red carpet at the Opening Night of “My Fair Lady” at Sydney’s Theatre Royal. Although I’ve walked on a lot of red carpet over the years, I’ve never had my photograph taken before.

I mean, there was an occasion at Trop Fest where I appeared briefly on the satellite feed to other states. And there was the night at the Opera House when Damo and I had our photographs taken by the “Wentworth Courier”. Sadly, we knew we wouldn’t make it to the social pages when Rachel Ward and Bryan Brown entered the room minutes after us.

But most of my red carpet moments are best summed up by my Andrew Olle Lecture experience of several years ago. Walking down the red carpet at Parliament House, cameras flashed rapidly snapping the veritable “Who’s Who” of Australian media. And then when it was our turn, the assembled cameramen literally turned away and changed their film.

Tonight was different though. Well, maybe not that different, as it was a friend who snapped the photograph :), so strictly speaking I’m still a “red carpet loser”!

I was very excited, though, when I was offered the tickets late this afternoon. “What are you doing tonight”, I asked Colin on the phone. “I’m going to this Clover Moore art launch at Taylor Square”, he replied. And so was I until about five minutes earlier. But when the offer came for opening night tickets (including the after party) for the Opera Australia production, there was little doubt in either of our minds about which was the better way to spend Thursday night.

“I’ve never seen such a crowded opening night at the Theatre Royal” Colin commented at one point. Nor had I. And it was a good a-list event. Kerry Ann was there in a slinky little number. Bob and Blanche were there, with Bob wearing a Nehru style white suit. Everyone seemed to agree he didn’t look all that well, though probably quite good for a man who must now be in his eighties. And Barry Humphries was there too.

Actually, I spoke briefly with Barry. Well, not so much spoke. I was chatting to a colleague and was telling her how much I’d enjoyed the show. Looking in my general direction as he walked past, he said “Yes I agree totally”. That’s a conversation, surely?

And it was a really good production, in my view. I’ve heard some negative stuff, but I really liked the show. I mean, it’s a really great show, with some of the most memorable songs in musical theatre history. In my mind, and occasionally out loud, I sang along with every song. And it’s such a great story. And as a production, I thought it was well-sung, well-directed, and had great sets and lighting. What more could you hope for on a Thursday night?

At the after party, I also ran into fellow blogger, Monty. This was the second time I’ve seen him out and about in Sydney in a week. He really does get around, doesn’t he? :)

Otherwise, it was quite a good day at work, and I managed to achieve quite a bit.

And now it’s late and it’s time for bed.