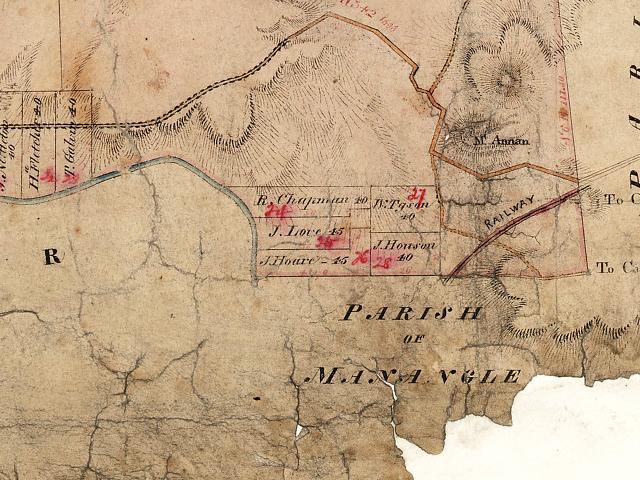 One of my favourite personal interests is family history. My earliest memory of this interest goes back to high school when we all had to do a “family tree”. Ever since then I’ve been fascinated. Although my interest is ongoing, I go through periods of great breakthroughs, and periods where nothing happens.

I made a brief reappearance on ABC radio today, talking about the significance/role of genealogy in my blogs.

If you heard the segment, here are the ancestors I’m interested in chasing up more information about.

John Love and Martha: There is considerable debate amongst researchers about the early life of John Love and his wife Martha. The essence of the debate concerns Martha and her name prior to marrying John Love. There are several theories, all of which are canvassed in the comments below. We know, however, that John Love was a member of the newly formed NSW Corps, whose role was to supervise convicts. Although the records are somewhat sketchy, I think we can also accept he and Martha came to Australia on the Third Fleet. There is debate, however, about whether or not their daughter, Elizabeth Love came with them, or whether or not she was born here. The ship on which they came, the “Matilda” departed from Portsmouth on March 27, 1791, arriving in Sydney on August 1.

James Rixon and Amelia Goodwin: Although the exact details of his birth have yet to be confirmed, it’s believed James Rixon was born in Derbyshire, England in about 1770, At the time of his conviction and sentencing, he was living in Ilkeston, a small market town in the Erewash Valley, Derbyshire. Aged 22, he was “Charged on the oath of William Reed on Suspicion of privately stealing out of his Box in the House of William Webster, of Ilkeston, on Monday the 24th of October last, the Sum of Nine Guineas”. The sentence “To be hang’d” was commuted to Life imprisonment. His partner, Amelia Goodwin was also born in 1770 and her first marriage was to John Goodwin. When convicted she was 29 years old and living at Greenwich, England. She was charged with the theft from her employer of a large number of clothing and household items. According to the court record the value of the goods was 39-shillings. Amelia Goodwin was tried at Maidstone, Kent, found guilty of the offence on July 15, 1799 and sentenced to 7 years transportation.

John Hoare and Elizabeth Love: John Hoare who was transported to Australian in 1801 came originally from County Wexford, although the exact details of his birthdate and place remain unconfirmed (see notes). Wexford is a town of about 10,000 people these days on the South Coast of Ireland. Much of the history of the area, including the county’s role in Irish independence is celebrated and preserved. Researcher, Graham Lewis believes he enlisted in the Royal Navy at the Port of London on September 7, 1795. Initially he was on HMS Royal William, and soon afterwards HMS Impregnable. He moved to the HMS Defiance in 1796. On board the HMS Defiance Hoare was one of a number of people found guilty of their involvement in a naval mutiny on board the ship in 1798. A few years after arriving in Australia, he married Elizabeth, the daughter of John and Martha Love.

Allan McLean and Janet McFarlane: Allan McLean was born on the Isle of Coll, Scotland in 1782. His father, John McLean was a boat-builder and carpenter, while his mother, Isabella McDougall presumably worked at home.On May 23, 1816 at Scarinish, the main village on the Isle of Tiree (just off Coll) Allan married Janet McFarlane, a waitress living in the village. They left from Tobermory on the Isle of Mull on September 27, 1837 and travelling on the “Brilliant”, they arrived in Sydney on January 20, 1838. Soon after arriving in Australia, Allan and Janet settled at Broulee, near Moruya, on the NSW South Coast.

Thomas Triggell and Henrietta Spencer: Thomas Triggell was born November 8, 1812 in the small village of Bramshaw, near Fordingbridge in Hampshire, England. Thomas Triggell and Henrietta Spencer were married by banns (in the church, as opposed to national registratoin) at St Lawrence Church, Downton, Wiltshire, on October 7 1832. Both signed with a mark and witnesses to the marriage were Charles Sleave (Sleane?) and William Pope. They came to Australia in 1834 on board the Ship “James” with their daughter, Ellen (although she is named “Ann” on the Shipping Records. They left from London on June 29, and travelled via the Cape of Good Hope to Port Jackson, Australia, arriving here on November 17, 1834. They eventually settled on the Monaro.

Robert Higgins and Ann Owen: Robert Higgins, who was from Nottinghamshire, was sent to Australia after taking part in The Walcheren expedition (July 30 – December 10, 1809), a very large British military operation during the Napoleonic Wars. Higgins was court martialled on September 6, 1809. He came to Australia on the Admiral Gambier II in 1811. He married convict Ann Owen on November 19, 1814 at St. John’s Parramatta. Ann, who was probably born in 1791 had come to Australia on the Wanstead, along with her illegitimate daughter, Elizabeth. Judging by the record of her trial at The Old Bailey, and having an illegitimate daughter, it appears Ann would have been desperately poor before her arrival in Australia. Upon a conditional pardon, Robert became a Constable. In 1828, Robert and Ann separated. The reason, according to evidence given at the coronial inquest into his death, was that Ann had an extramarital affair. Robert Higgins died from asthma on June 11, 1828 at Burragorang. Ann died on July 23, 1832, and is buried beside her daughter Elizabeth Scott at Sutton Forest.

William Rixon and Ann Hoare: William and Ann had a large family and farmed in the Campbelltown district, now part of Greater Sydney.

James O’Brien and Mary Smith: James and Mary were from the Slane district of Ireland. They came to Australia in 1864, settling in the Bega Valley.

James Wright Goward and Mary Ann Denny: James and Mary Ann were from the Norfolk District of England. They settled on the Kameruka Estate, near Candelo, via Bega, NSW.

Thomas Rixon and Jane Laing: Thomas and Jane lived in the Bombala District of Southern NSW.

Donald Laing and Sarah Higgins: Donald Laing was probably one of Australia’s longest serving mailmen, completing 61 years of continuous mail contracting service, most of it carried out on horseback.

William Elliott and Mary Fitzgerald: At this stage, I have almost no information about William Elliott and Mary J Fitzgerald. I do, however, think there’s a fair amount of evidence they were the parents of Catherine Elliott who married John Dunn at Cooma on May 26, 1873. If this can be confirmed, they’re my g-g-grandparents. As I cannot find a marriage record for them yet, it’s likely they either didn’t marry or came to Australia as a married couple. I’m sure the latter is true!!

John Noonan and Hannah Lynch: Hannah Lynch was an assisted immigrant who came to Australia where she married John Noonan. They lived and worked mostly in the Bega District.

William Rixon and Ellen Laing: Now this is a fascinating story. William and Ellen were first cousins who had at least three children together. William also had another family with whom he lived in Bairnsdale in Victoria. Easily the most interesting (and complex) story I’ve been researching.

James O’Brien and Lena Noonan: James and Lena mostly worked as dairy farmers in the Bega and Lismore districts. Their decision to move to Lismore was the reason why I grew up there.

Charles Dunn and Bertha Rixon: After serving in the First World War, Charles married Bertha. In the 1930s, they moved from Bombala to Lismore.

Albert O’Brien and Bertha Dunn: Mum and dad. For many years dad worked at the Lismore Base Hospital, while mum mostly worked at home.