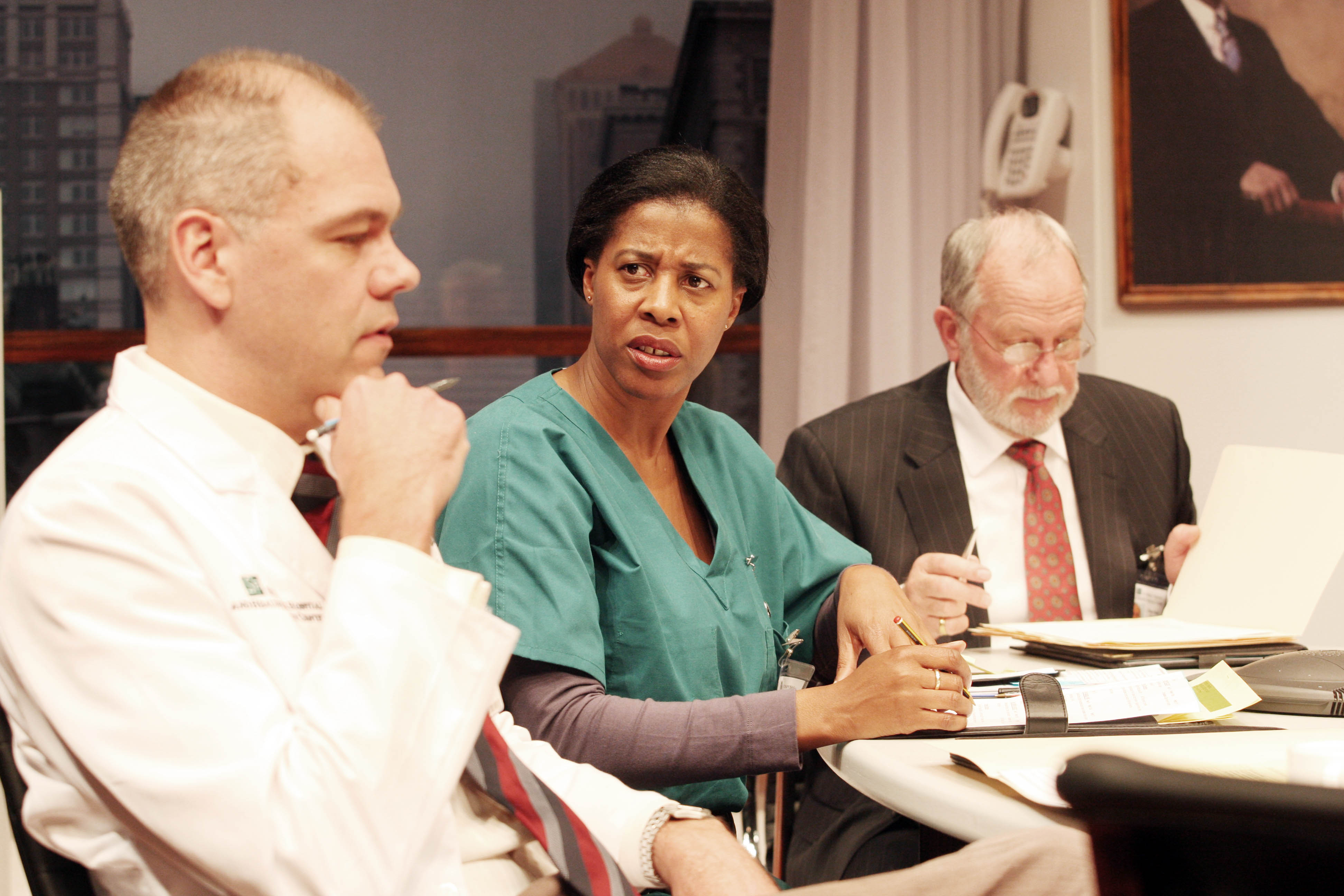 Colin, Peter and I crossed the bridge tonight to see “The God Committee” at The Ensemble which was a really enjoyable, interesting play.

The setting for the play is a hospital meeting room in an American city somewhere, where a committee must make decisions about candidates for transplant surgery.

They have a set of “independant criteria” such as the candidates not being drug users, having a good support network and so on.

Thus, at the heart of the play there is argument that even “facts” and “independant criteria” can be valued laden and open to many different interpretations.

A timely play for a few reasons, as the issue of God’s existence (or at least the existence of a creator) has come up a lot in various conversations I’ve had in the last twenty four hours. At the pub last night, a colleague mentioned growing up in a household where his father was an atheist and his mother was a pagan. Today at work we discussed the forthcoming canonisation of Mary McKillop.

And then tonight I tweeted what I thought was a rather amusing comment that, “Atheists are quite strong in their belief eh? Wondering if they appreciate the irony?”. The stone-faced response from someone I’ve never heard of was.. ” nope – atheism isnt a belief system. Instead its the position where one states the evidence for any god just isnt enough. And by a huge margin ;)”

Strictly speaking that’s not correct: atheists are people who do not believe in the existence of God or gods. If you think there’s a possibility of the existence of God if there’s enough evidence, you’re not an atheist. You need to find another word for what you believe because atheist isn’t the right one.

And frankly I think atheism IS a belief system. It’s a belief-system based around a notion that things like “science” and “facts” are somehow non-subjective interpretations of reality.

The first virus was only found 100 years ago. Prior to that science offered a different explanation for a range of medical conditions. In 100 years time, many of the conditions we currently face we may well come to understand as the cause by something else we do not know or understand.

I’m willing to accept that if 99 people look at a car and say it’s a car, and 1 person says it’s an elephant, that it’s probably a car. But we’re dealing with far more complex matters. Matters which have fascinated humans for, presumably, as long we’ve existed.

When it comes to the creation story, I lack the absolute certainty of both the fundamentalist and the atheist. Obviously either one or the other position is correct, that’s logical. I just don’t accept the evidence-based so-called scientific approach will you give you answer, as much as the absolutism of literal biblical interpretation. Both “searches for meaning” are based around a set of assumptions.

And that, I guess gets back to the heart of “The God Committee” as a play: that so-called reality is subjective.

It reminds me of a quote from a book by Caroline Jones which I read years ago, and which I often quote. She said, “More many years people have argued that seeing is believing. Now, many others are saying that believing is seeing”.