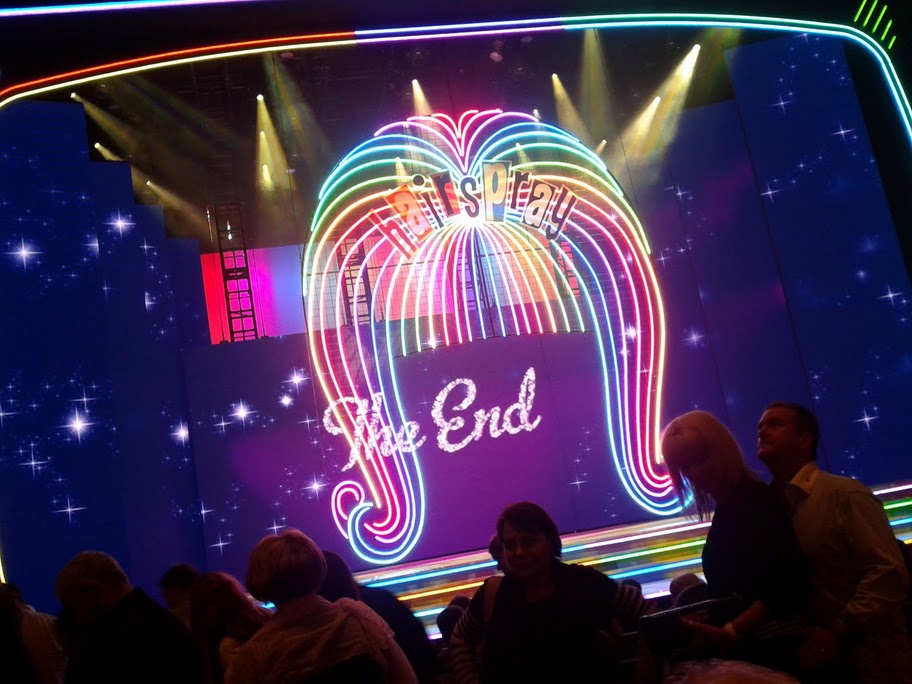 For a few months now, Colin and I have been trying to find a day and time that suited us both to see “Hairspray – The Musical“, currently at Sydney’s Lyric Theatre. I’d seen the original movie years ago with Divine, Sonny Bono, Ricki Lake and so on, and Colin had seen the John Travolta version, which I’d never bothered to see, since I loved the original so much.

But even though we had both been wanting to see the musical for some time, life and overseas travel had stopped us from actually purchasing tickets. In some ways it was good to wait a few months, because we ended up with really great tickets which, in theatre terms, were pretty much close to perfect. In the seventh row, just to the left of centre, you have a great view of the stage without being too close. You can also hear everything really well, though that’s not too much of an issue at the Lyric Theatre since everything is amplified. That said, we both struggled at times to pick up some of the lyrics, but that may just have been a factor of age.

The story line for the musical is pretty much the same as for the first movie. Tracey Turnblad is an American teenager who loves a “Bandstand-style” television dance program which remains “racially segregated”. Only once a month are black teenagers allowed to appear on the program. I guess I’m too young to understand how that could have been a reality. Sure, I’ve lived in parts of Australia where there’s “informal segregation”, and even now Australian media (like Australian society) remains fairly white and middle-class. But still, the idea of official and legal segregation of television programs, schools, restaurants and so on, is mind-boggling. There’s actually a line from the show which resonated strongly with me, when Edna (the mother) says something about how “people like us” never get to appear on television unless they want to laugh at us. And that’s what I really like about the whole idea of “Hairspray” – it deals with a really tough issue in a very accessible manner.

The musical is great fun, and it pumps along at a cracking pace. The story is pretty much the same as the movie. The only significant difference I noted was that Tracey never ever “ironed her hair” which, in the original movie, was an indicator of her growth as a character. The music is also very much in keeping with the original movie, though I didn’t find there were too many “memorable” songs. I don’t mean the song dance numbers were forgettable, it’s just that I didn’t find the tunes particularly memorable. The only song I really remember a few hours later is “Welcome To The 60s”.

The best scene from the show, in my opinion, is the big number – a fantasy dance piece – involving Wilbur and Edna Turnblad. Grant Piro (as Wilbur) and Trevor Ashley (as Edna) are both terrific. And even though it seems like they might have fluffed a couple of lines tonight, they’re head and shoulders above the rest of the cast.

In particular, I loved the way in which they interacted with what’s possibly the most controversial aspect of the show – theatre wise – the giant screens which are “the set”. Aside from the actors, there’s little else on the stage, as the giant screens do the scene changes for you, both in a literal sense, and in helping to create the mood for the show. It could have all gone horribly wrong, and looked like nothing more than a pop concert, but the designers and producers and directors and whatever, have managed to pull it off with great success.

So overall, Hairpsray wasn’t the greatest piece of theatre I’ve ever seen, but it was pretty bloody good.