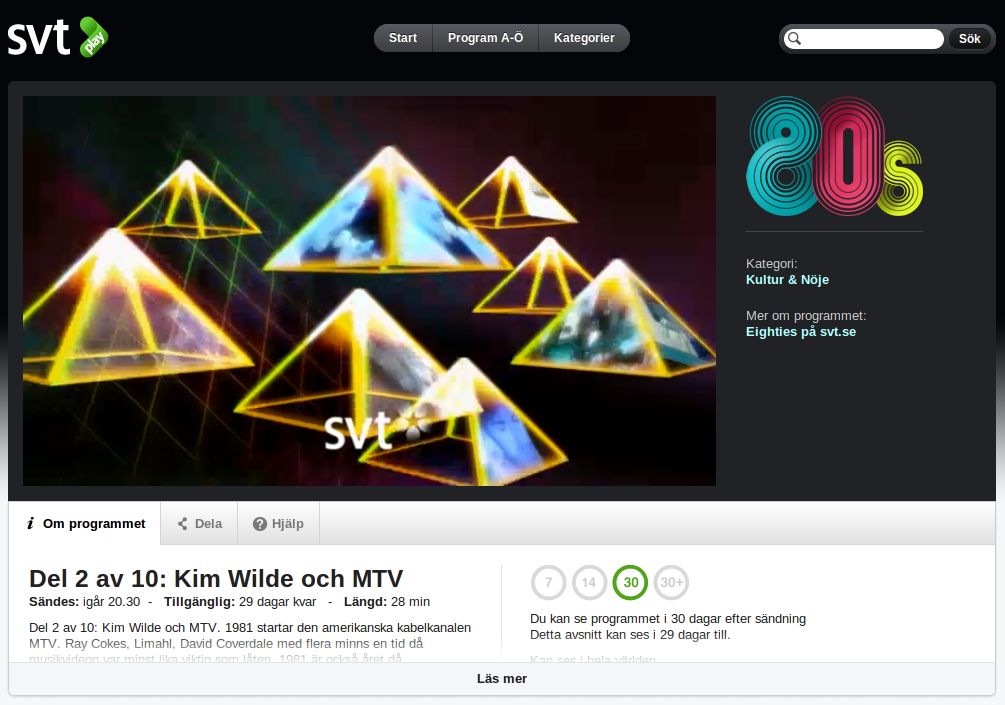 “Oh my God, you MUST watch it”, I told a colleague earlier this week. She grew up in Sweden and is a major fan of Depeche Mode. I was talking about the first episode of “80s”, a new half-hour music documentary from Swedish TV, SVT. The first episode featured a very early Swedish television performance from the band, during which a rather nervous Dave Gahan stumbled his way through an interview, and even seemed somewhat surprised when the presenter spoke to him in English. The essential argument of the first program was that the 80s began as a battle between synthesiser-pop and hard-rock, and that, in some ways, Depeche Mode embodied elements of both.

Tonight, I watched the second episode. Tonight’s program was about Kim Wilde, as the embodiment of the pop princess (who later became more interested in gardening, having dogs, and raising children) and about the rise of the video clip through MTV. There were some terrific modern-day interviews (in English) with some MTV VJs, as well as Kim Wilde, Howard Jones, Limahl, Midge Ure and others. One of the VJ’s commented they had to travel New Jersey for the launch, as it was the early days of cable. Midge Ure talks about their “accidental” approach to the making of the “Vienna” clip. One of the guys from Spandau Ballet talks about how unfashionably dressed Americans were before MTV exposed them to European fashion. It’s been interesting to watch the last two episodes and to see these performers reflect back on their “time in the sun” thirty years ago.

Although there’s a lot of Swedish commentary throughout the program, there’s more than enough English for non-Swedes to also enjoy the program. So if you’re of a certain age, or you just like 80s pop, I’d recommend watching the program.