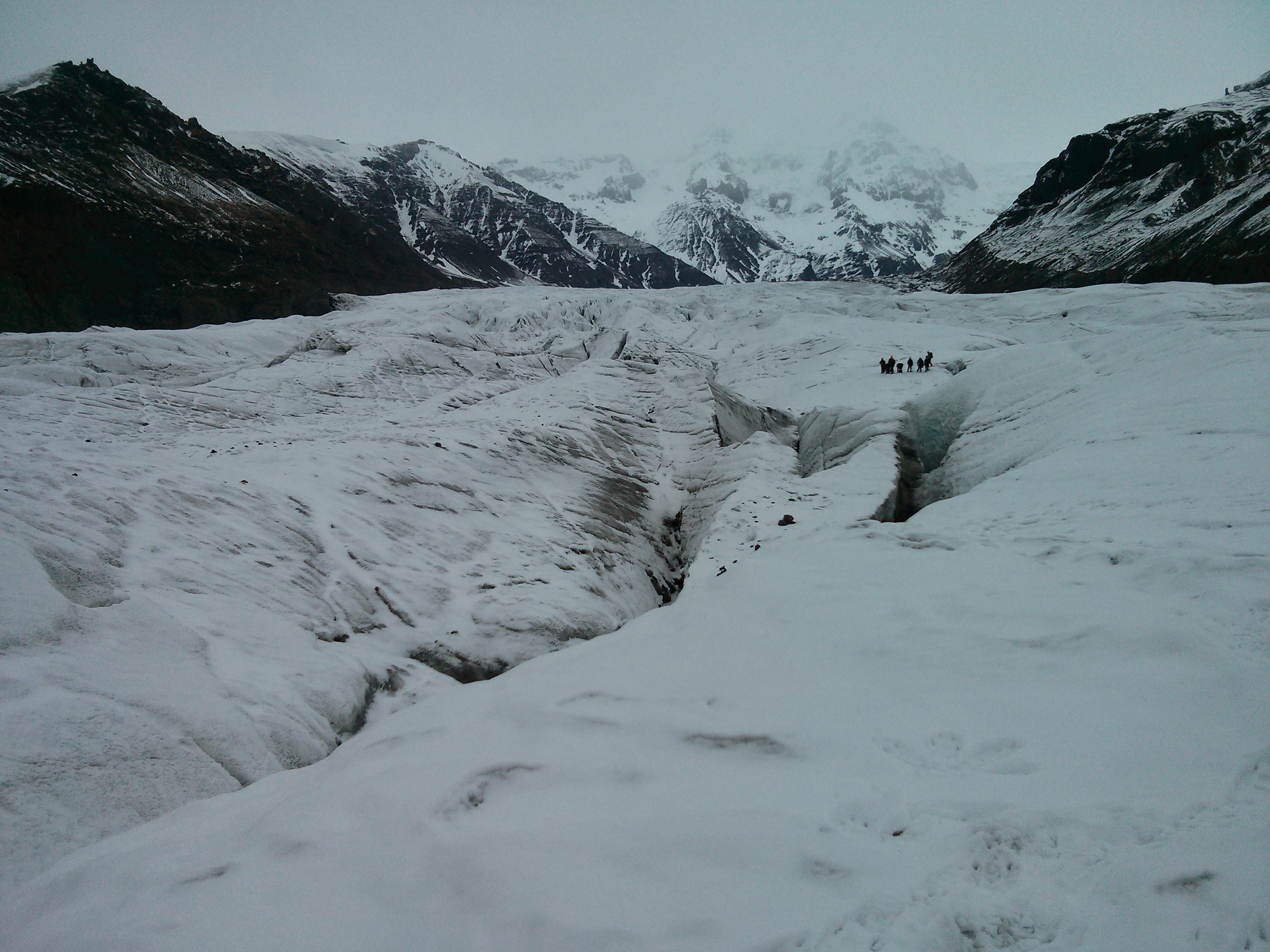 “It’s so incredibly silent”, a fellow traveller said to me as we stood together, as part of a group of fourteen on a two-day bus tour of Southern Iceland. “Sometimes”, I replied with a smile, a reference to the constant chatter from many in the group. She smiled back. “We are standing on a bloody glacier, and all you lot can do is chatter”, I thought to myself. I guess it’s one of the compromises you have to make in going on a group tour: the fact that other people on the tour will probably annoy the crap out of you.

On the positive side: you get to experience something in a safe environment, in comfort, and with an excellent guide. Our guide for the trip through Extreme Iceland has been Berglund. She picked me up from my accommodation this morning. As we chatted before the others joined the bus, I learned a little about her, including that she had visited Australia briefly, enjoyed it, but had found it incredibly expensive. She, of course, had been travelling in the wake of the collapse of the Icelandic economy. She had also been away from Iceland during the eruption of the volcano a couple of years ago.

“What was it like for people here during the eruption?”, I asked as we passed Eyjafjallajökull. “I don’t know, because I was in New Zealand”, she told our group, adding that “It wasn’t so bad for people in Reykjavik and other parts of the island. Just a bit of ash. But it was terrible for people close by. The farmers lost a lot of stock. There was also a lot of flooding, as the eruption melted the glacier”.

The story of volcanoes figured a lot in the first day of the trip. For just about every mountain we passed there was a story of an eruption in the last fifty to one hundred years, often with tragic circumstances. Berglind told the story of the people of the Vestmannaeyjar (Westman Islands) for example, who were woken in the middle of the night by a flow of lava past their houses. As many of the houses were destroyed, and they had nothing to go back to, many people left the islands for good, she told us.

As snow is forecast for tomorrow, the agenda for the trip has been changed slightly. The planned “walk on the glacier” for tomorrow was brought ahead. We probably spent more time on the bus today than would have been normal for this trip. That didn’t worry me so much, as the sights were all very interesting, and the commentary excellent. It was only towards the end of the trip, after a few hundred kilometres, that I put my headphones on and listened to a podcast. By then we had already walked on the glacier, and so for me, I’d already put a big “tick” against the day.

Along the way towards the glacier, we had also stopped in at a few locations, including a gorgeous beach (where the sand was volcanic black in colour), a waterfall on a private property (where I slipped through a hole in the bridge – no damage to the bridge, a bruise for me), and a lunch stop where I was a sucker for the “traditional” Icelandic beef soup. It wasn’t too far from the Irish Stew I grew up with as a child, I thought to myself. And then, of course, we came to the glacier walk.

“Ice and snow” are very exotic for Australians, I told one of my fellow travellers at one point. Putting the clamps on our hiking shoes thus required some careful instruction. Given the dangers involved with walking on the glacier, we were also asked to follow closely in a single line, not to divert from the track, and to always ask for permission if we wanted to take a photograph of something somewhere away from the main path.

There was no need for a diversion, in my view, as we covered a fair bit of ground in the two hours or so spent on the ice. We walked, we learned a little about some of the characteristics of glaciers, and we enjoyed a fantastic experience. For me, it was sensory overload. “This is the oldest thing you’ll ever put to your mouth”, Berglund told us, as she handed us some ice she had dug from just below the surface. “It’s a thousand years old”, she added. Although I’ve seen and experienced ice and snow before, this was on a whole new level.

I enjoyed some wonderful over dinner conversations, including some “Android bonding” with a 60-something American woman. I noticed she had Nexus 7 (as do I) which was a great conversation starter, and she was the first person who has been able to explain to me, and show me properly how to use Swype. Win. She had chosen the fish (which I think she was a little disappointed with) whereas I had chosen the lamb. The lamb was probably the tastiest, most tender lamb I’ve had in my life, and so I asked if she would like to share.

We’re spending the night at a small guest house on the South East Coast of Iceland. “I checked the GPS and can’t believe we’ve travelled this far”, I told Berglind over dinner. Having spent some time living in the Australian Outback, I’m familiar with the sometimes deafening silence of being in a remote area. By deafening silence, I meant the almost constant rumble you can sometimes hear, as your ears which are used to hearing noise, go in search of the most minor sounds. All you hear, though, is the silent rumble of nothing. Love it!