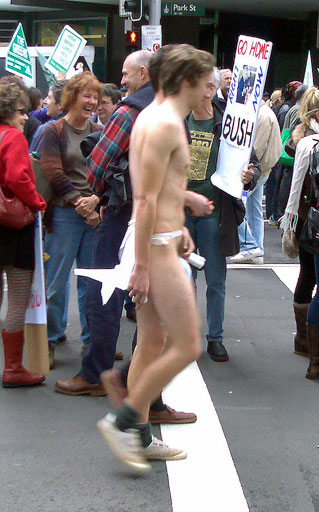 About the only thing that made me smile at today’s Anti-Apec Protest in the city was the two naked guys with socks covering their genitals. Although I’m not entirely sure about the point they were making – I couldn’t read the badly-written signs they had covering their rear-ends – they certainly attracted a lot of attention, especially from the media. And for my part, I kept giggling about how they were constantly re-arranging their socks which looked in danger of falling off as they walked along, perhaps due to the cold weather.

The nude protest was about the only humour apparent in the protest held today at Town Hall before making its way to Hyde Park. For the most part it was a protest by the usual suspects using the same old anti-Howard/Bush (but Labor is no better) kind of rhetoric. It was not a mainstream protest, by any means, unlike, for example, the Palm Sunday protest in the lead up to the Iraq War which managed to attract a broad cross-section of the public.

Noticeabley different from that protest, where people marched with confidence, was the fear you could see in the eyes of a number of protesters. For many, especially the younger ones, I’d imagine this was their first ever major protest. And as you looked in their eyes you could see concern, caution, and all those other very human feelings, as they perhaps anticipated violence or being arrested.

And chances of them being arrested were probably pretty good, as I’d NEVER seen such a significant police presence in the city before. In my estimation there would have been two or three hundred police officers (actually probably more) either in groups of two or three or in lines forming a barricade to direct the protest towards Hyde Park, or at key locations such as outside the Commonwealth Bank and Starbucks. Clearly, the police were anticipating trouble.

But in Sydney we’re not one for the violent, riotous protest, as I explained to a colleague from Melbourne a couple of weeks ago. “We don’t riot in Sydney”, I told him. Another colleague here in Sydney told me yesterday she thought it was because we’re superficial. In Sydney, she said “people would rather go to the beach than march down the streets and it’s because Sydney lack sthe intellectual culture that Melbourne has.” I don’t think she’s right about that, I think we just don’t believe in violent protest as a means to achieve things.

And I think much of that derives from the more multicultural nature of Sydney, being made up of so many people who had left behind violent cultures when they came to Australia, and who “freeze” at the prospect of seeing violence in the streets. I think there’s also an element of practicality, in that geographically-speaking, Sydney doesn’t have the same CBD-focus as Melbourne.

Whatever the case, I’m pleased there wasn’t violence on the streets of Sydney today. And thank goodness for the nude blokes who brought a bit of humour into it all.