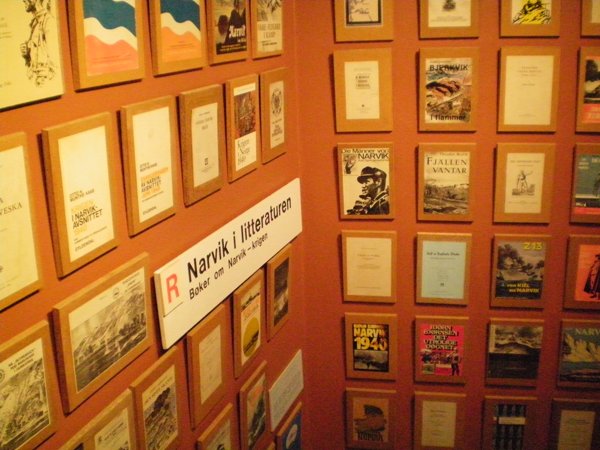 Narvik in Literature in War Museum

“The king of Norway once sat at this table”, our host Tor told us proudly over breakfast this morning. “This is the most photographed chair in all of Norway”, he added, and then told us about how the guest-house in which I’m staying was once a building for German soldiers during the Second World War.

“When we bought this place thirty eight years ago, we found an inventory for the cellar”, he continued, and then brought out a bottle of Pepsi Cola. Showing us the fine print on the bottle, we were informed Pepsi continued to be manufactured during the war in Hamburg under licence, which surprised me.

I wasn’t sure what to make of the story, since I was sitting at a table of mostly German (and one Spanish) tourists. How did they feel about being reminded of the history of Nazi occupation? Did it matter all those years later, or is it still something Germans carry with them, passed on by their parents and grandparents? I didn’t have the courage, nor the interest to ask, remembering all too well the famous episode of “Fawlty Towers”.

And on top of that, right in the middle of Narvik there’s a terrific museum about the town’s wartime history. Walking around the museum today, though, I felt a sight discomfort. With all of the evidence of weaponry (there’s guns, tanks, bullets etc), you can imagine how a real “war nut” would just love the place for all the wrong reasons. It worried me for a moment that some would see this as a place to relive some of those war-time battles and fantasies.

I was more interested in the many photographs hanging on the walls. I wanted to look closely at the faces of the people in them, to get an insight into who they were (on both sides), and how they lived during this period. The most startling image, for me, was that of a prisoner of war. I was really very moved by the image of a young man, barely twenty years old, and almost skin and bones.

Photographs in the museum also demonstrate just how badly damaged the town was due to bombing, which also surprised me.

The museum is well worth a visit, by the way.

I’m less convinced about the merits of the one-hour LKAB sight-seeing tour I went on. LKAB is the big mining company which operates out of Kiruna and Narvik. At the moment, they supply about 3% of the world’s iron ore, and the mine at Kiruna is, apparently, the world’s largest iron ore mine. Yes, I see your eyes are glazing over already.

It was interesting if only because we got a behind-the-scenes look at what is obviously the most important employer in town. It was great to have a close look at the men working the mines.

The tour also took us around much of the town, which was great, as it helped to explain what a few of the monuments stood for. Most of the monuments in some way seem to recognise the miners and the workers of the community. Some of the statues are almost Soviet-like in some respects, as they celebrate strength and hard work.

Narvik is clearly and largely working class community. You can see it in the imagery and you can also see it in the faces of the people as you walk down the street. The people here look different to those I encountered in Sweden. I don’t think I’ve seen a single person with that typical bleach blonde Swedish look. Instead, I’ve seen a lot of mousy brown hair and a fair amount of red hair. The faces are also either quite pale or deeply tanned, with nothing much in between.

This was also evident when I went into the supermarket today and a bought a few things for lunch and dinner tonight. Although the owner of the guest house indicated all Norwegians spoke English very well, I found that I had to speak reasonably slowly and deliberately when I went looking for a couple of things.

“Are you English?”, I was asked by Irene our tour leader, replying in the negative. I don’t think many Australians make it this far north (not that far from the north pole), though I did notice the name of someone from Maryborough in Queensland above mine in the war museum guest book.

The weather was pretty spectacular today and is likely to improve tomorrow. My plans for tomorrow include further relaxation and maybe the fjord tour, depending on how the weather pans out.

Unlike the early part of my holiday, this is all about relaxation. You just know you’re on holiday when you can’t figure out what day it is, and that’s how I’m feeling at the moment. Totally relaxed.