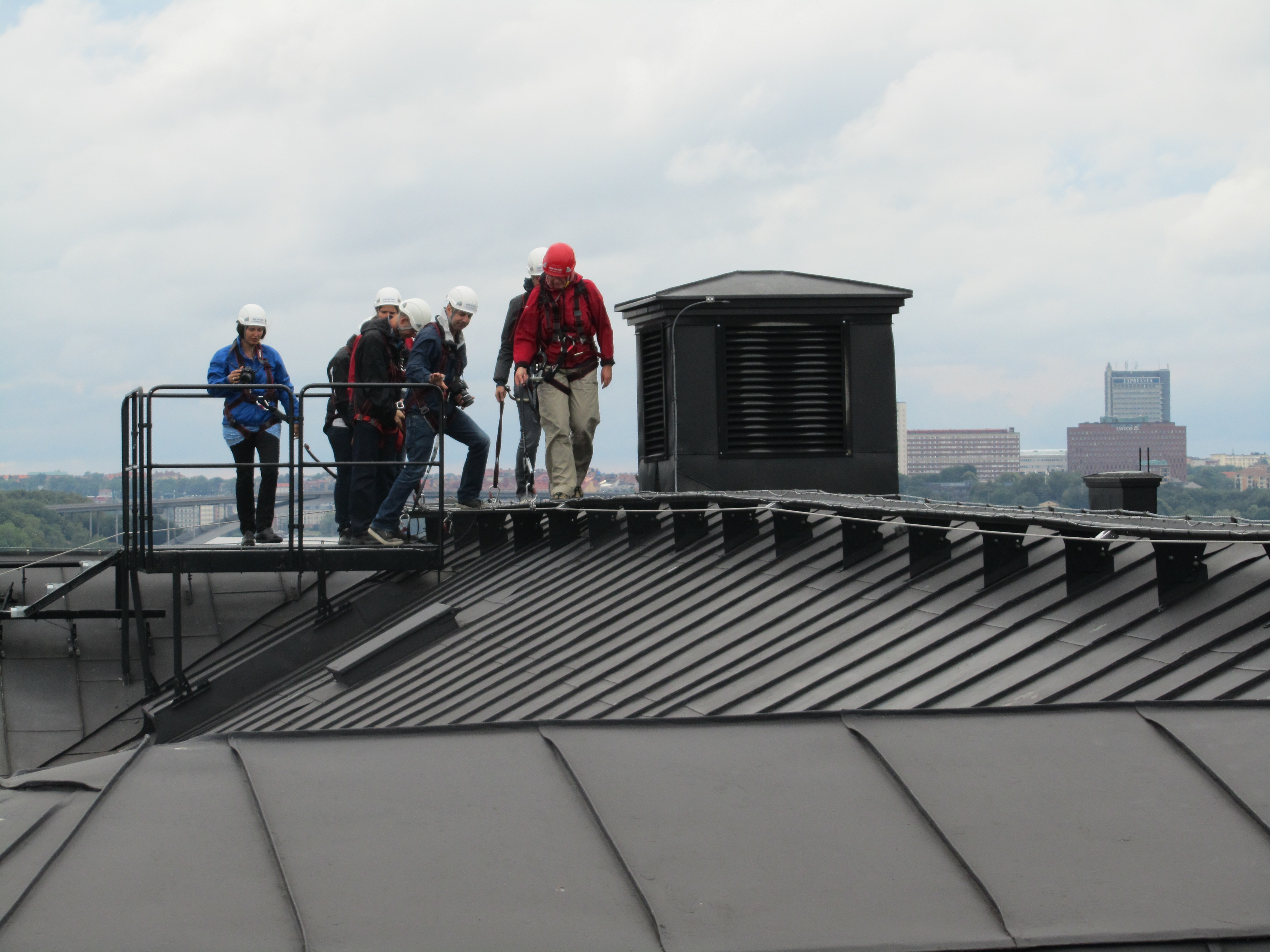 In most modern towns and cities, the higher you go, the more interesting the view. That’s not the case with Stockholm.

Stockholm is a low-rise city, and the best views, in my opinion, can be experienced just above the roof-line. The view from Katarinahissen near Slussen, for example, is terrific. In contrast, the view from Globen is too high, and too far away to gain a sense of either the city or the landmass.

Last year, I went on the excursion to the top of Globen, and found it more interesting to watch the workers remove the snow and ice from the top of the sports arena than to look out over Stockholm. I’m told the same thing is true of Kaknastornet.

But the Stockholm rooftop tour – Upplev mer (experience more) is in a whole class of its own. I read about it a year or so ago, and so when I planned this trip back to Stockholm, it was one of the first things I booked for. Put simply, it’s a 75 minute guided tour – with extensive historical background – from the rooftop of one of the buildings on Riddaholmen, one of the central islands of Stockholm.

There was only four English speakers on the tour – an American couple, a young Czech woman living in Paris, and me – and so I think we had a more highly personalised, intimate experience than the larger German-speaking group just behind us. Our tour guide was excellent, by the way, sticking to a script, but also responding to our interests and more than happy to answer questions. She also had a nice sense of humour.

What was really great, though, was the view from just above the rooftop. You get a really great sense of the location of many of the city landmarks: where the Royal Palace sits, for example compared to Gamla Stan. We noticed the Royal Palace was flying the Swedish flag at half-mast, by the way, in recognition of the deaths in Oslo.

You also get a great sense of the history of Stockholm as it unfolded, including some perspective on the reclaimed land that makes up part of the old town. On top of that, it was fascinating to look down on the construction works of the cross city tunnel.

I’m not afraid of heights in any way shape or form – I spent much of my childhood climbing on the roof of our house to “come down now” cries from my mother – and so I found it absolutely enjoyable. As you’re securely hitched to a safety wire, the risk of falling seems quite remote. However, I’d say if you do have a fear of heights you might find it a little confronting.

Bottom line though? One of the best tourism experiences I’ve enjoyed in Stockholm.