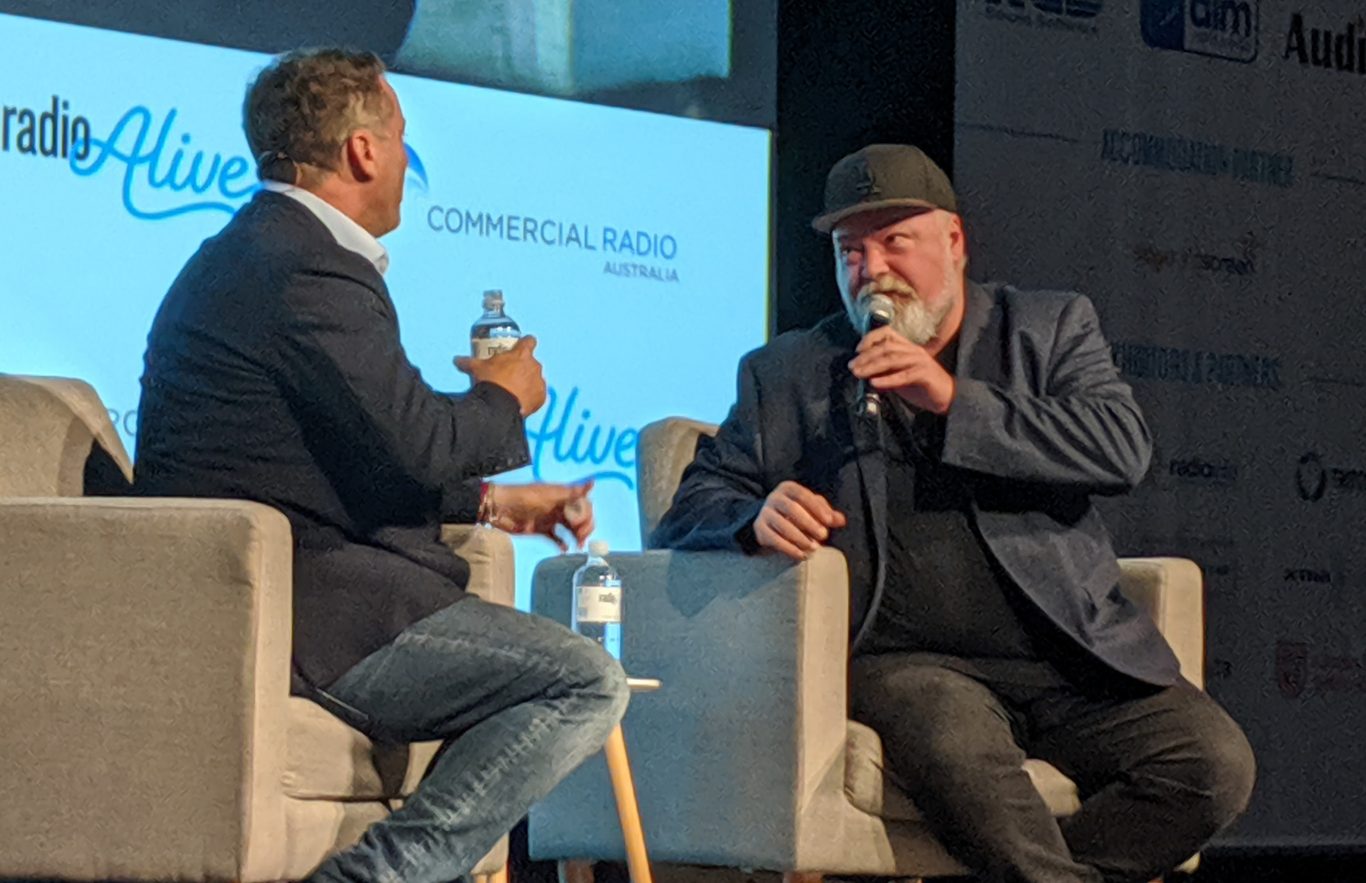 “I was on the verge of getting up and walking out”, a colleague told me over lunch. “He’s a disgusting, horrible person, and represents everything I hate”, she added.

She was referring to the radio presenter, Kyle Sandilands, in conversation with TV presenter, Karl Stefanovic. They were on stage at Radio Alive, an annual radio conference (put on by the commercial radio sector, but of broader interest than just selling ads), held this year in Brisbane.

The conversation was full of expletives and comments which a lot of people found offensive. “What did you first think when you met Jacqie O?” he was asked to which he replied, “I thought she was f…able”. That kind of thing. He also told us that, when working at a radio station in Perth, he was engaged to one woman, but “f…ing six others”. So yeah, in a post #metoo world, his schtick (and it clearly is a schtick) didn’t go down well with a number of peoplle in the room.

While that was “all” that some people heard, I “heard” that he absolutely loved working in radio. He told the story of how he, as a child, used to “play radio station and play news readers” with another “nerdy boy who wasn’t very good at sport”. This resonated with me instantly and helps to explain my own career trajectory. That’s what I did too. And I knew who that other “nerdy boy” was, a colleague of mine, sitting in the audience.

He also described the secret to his successful radio partnership with Jacquie “O” Henderson was that he admired her before he met her and that they never “compete” for space on the airwaves they share. He also said that, while she does a lot of program preparation, he does “none”, so that he can listen and respond as a listener would. He said they have no “scripts”, and they listen to each other. He also said that when they were paired together, he was initially offered a much higher salary (even though she was the more experienced radio presenter), but they had insisted on salary parity.

But that wasn’t enough to convince a few people I spoke to there was maybe some degree of integrity in the rough public face of Kyle.

The other speaker at the conference who polarised the audience was a bloke called Michael “Shingy” Shing. Look for him on the internet, and you’ll see a whole range of Youtube videos, and that he has worked at places like AOL as a so-called “Digital Prophet”. At the centre of his talk was the idea that after twenty years of rapidly and enthusiastically embracing technology, we’re starting to either reject it or find a more appropriate place for technology in our human lives. He talked about his own experience, for example, of getting rid of his television twenty years ago.

His speech was full of recent advertising innovations, recent developments in the internet of things, and a range of other interesting material. “It was like a reeeeaaaaaallllly long Ted Talk that went nowhere”, said one of the people I chatted to over a drink, later in the day. Another, though he had lots of great thoughts around the central thesis of the appropriate role of technology in people’s lives.

Other interesting bits and pieces from throughout the day?

There’ll be a major advertising campaign before Christmas on commercial radio and TV promoting DAB+ radio. The research indicates most Australians have heard of digital radio, and might even have one in their car, but don’t really understand the benefits, and how to tune in.

On a panel of radio executive producers, one spoke about how she planned her radio program two weeks in advance, so there’s always a back-up for those days when there’s nothing “topical” to talk about.

The impressive Cathy O’Connor from NOVA (the most interesting on a panel of CEOs) talked about how radio sales (and media generally) had been experiencing an economic downtown this year, but was hopeful that, when you take into account the more positive five year circle, things would be okay.

She also had a funny line about the short-term failed experiment of combining music and talk radio under the banner “Vega”. “We couldn’t explain it to the audience”, he said, adding “We could hardly explain it to ourselves”.

And on that issue of confidence, radio was described as a “resilient” medium. In contrast with newspapers and television, which had both experienced difficulties by losing audience, radio audiences are holding up remarkably strongly.

Perhaps it’s the intimacy of the medium. Or maybe it’s the fact I have written this blog post with the radio playing in the background. You don’t need a pair of eyes to listen to the radio. And that’s why I love it.

I’ve been working in radio for over forty years, including thirty at the ABC.