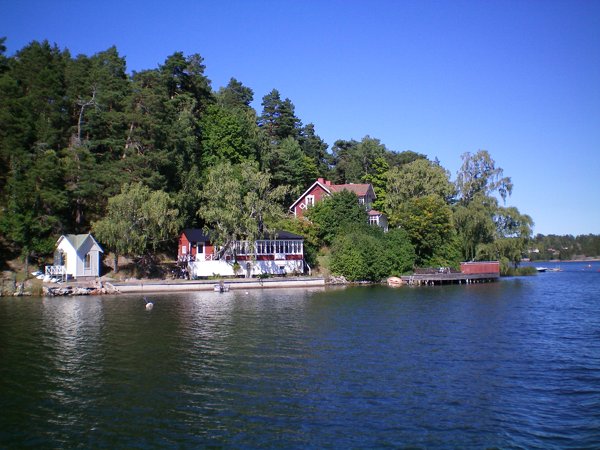 “It’s a gay day here in Stockholm”, we were told by the nice bloke on the tour-boat this afternoon. Even though the boat was mostly full of Swedish mums, dads and kids, it was a way, I think of making me and the American bloke feel welcome also. “For twenty years or so, we have been very open about a lot of things in Sweden, including sexuality”, he continued, making that welcome seem very genuine, with nothing tokenistic about it all. The buses here in Stockholm are flying rainbow flags, there are rainbow flags near the Royal Palace, and the department store, NK, has dedicated their shop windows to gay and lesbian-themed displays. Although the main action happens next week, Europride in Stockholm began officially today.

And what a beautiful day it was, too. A perfect day for a tour called the “Archipelago Race” which I would highly recommend. The staff were friendly, the tour guide well-informed, and there was a genuine sense of joy amongst those taking part. In essence, it’s a tour around the outskirts of the island of Lidingo. But because the island is so large, you really get to see a lot of the inner parts of the archipelago. And as the boat is a reasonably fast and small one, you can skip through the boring bits, and really get into some of the nooks and crannies of the archipelago.

Along the way, we were shown Bjorn Borg’s former villa, and given a vague direction that Bjorn Ulvaeus from ABBA lived on one of the more exclusive islands we went past. And closer to Stockholm we went past the site of the planned ABBA Museum, which the guide told us would be very expensive to enter. “Interesting”, I thought to myself, wondering if that’s how it’s viewed by ordinary locals. And the people doing the tour seemed like honest, genuine, ordinary locals too, telling us where bucks parties are held and such, as well as the more traditional tourist information. The tour guide also explained some of the history of the archipelago, about how workers would rent out their houses in summer to the wealthy people of Stockholm. She also explained a little of the history of the dominant colour schemes of Swedish housing – red and yellow – as colours which would appear to be like bricks and stones.

It was a perfect day for a trip around the archipelago. The temperature was about mid 20s and there was a light breeze as we travelled around. I noticed the other single bloke on the boat was sweating a bit. “It must be his first day”, I thought to myself. After a few days of warm weather, I’m finding myself a little more aclimatized now.

I thought I might get out of Stockholm for a bit on the weekend. There’s a few nearby towns and cities which can be reached easily by fast train, so I thought I might do a day trip or two. And then on Sunday night, I’ve got a ticket for the Peter Joback/Eva Dahlgren concert at Skansen. I’m hoping for great weather, a night outdoors listening to some great music, and then maybe a drink or two afterwards.