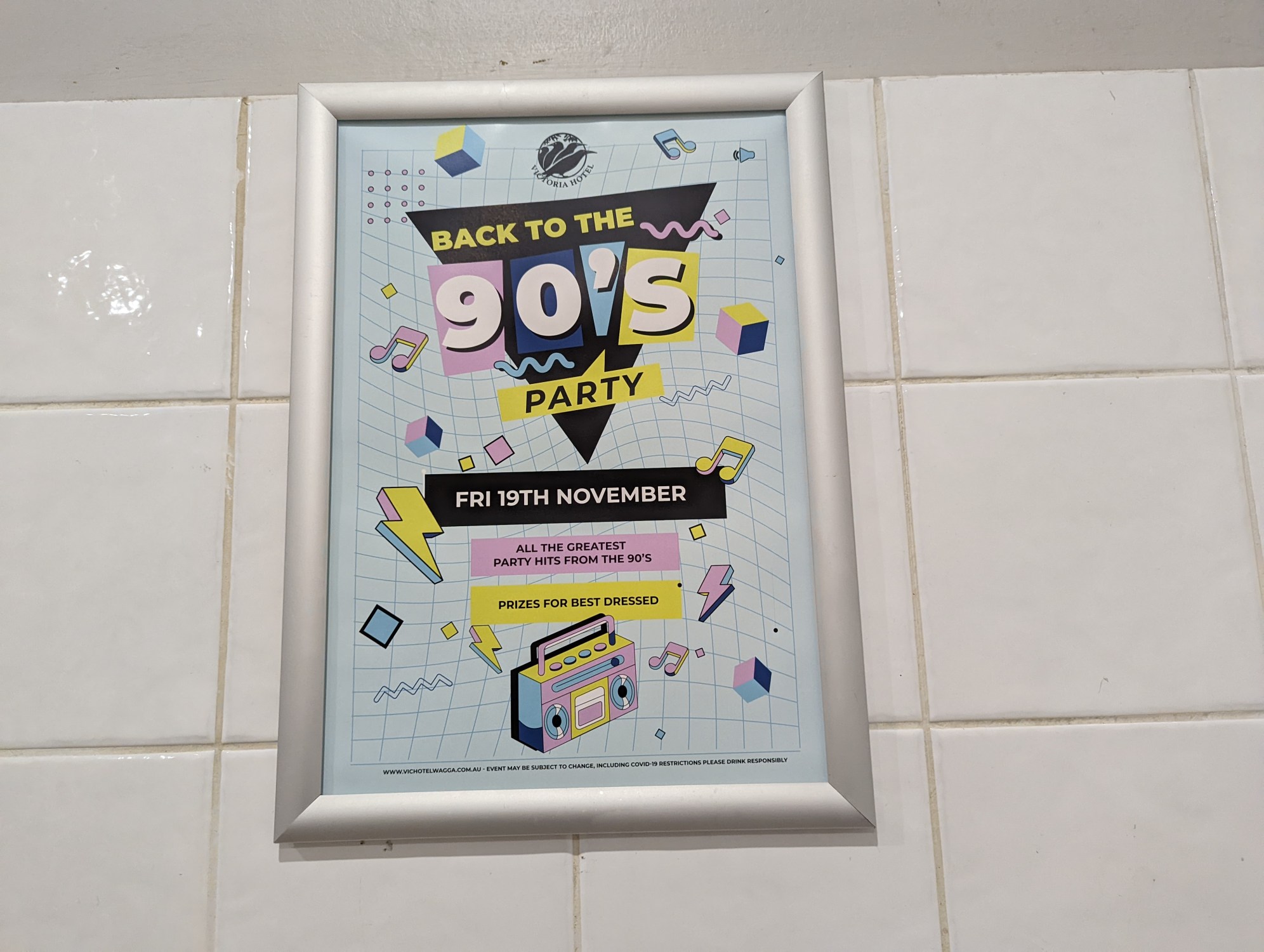 A tip on Australian male etiquette. When you’re standing at a urinal you should only ever look forward, otherwise, you might see things you might not want to see. (Or maybe you will!!)

The advertisement I saw at The Victory Hotel last night took me right back to my earlier days in Wagga Wagga. “I could be the DJ”, I thought to myself.

I also thought of my friend John. In the early 90s, he and I used to go regularly to the “Choices” nightclub. Along with “Cocos” it was the “place to be” on a Friday or Saturday night. “Choices” (which we called “Chances”, while Cocos was nicknamed “Chokos”) was the more “urban” of the two nightclubs. There was definitely a gay “undercurrent” to “Choices” and the music was a little more “sophisticated”.

In particular, I remember the song “Jump” by “The Movement”.

The night before we had been to a trivia night at the “Thirsty Crow”. “If it was 30 years ago and this was happening, I would have been here”, I said to my friend Sue as surveyed the room.

We laughed as we tried to work out which group of people I would have been sitting with. Were we the nerdy crew of ten sitting up the front answering all the questions, but not actually eating or drinking very much? (Hardly). No, I would have been part of the table sitting down the back, eating and drinking, and answering the questions, but also disputing the answers :)

Last night, I was invited to a dinner party which included some people I knew from my Wagga days, but also some new people too. They were SUCH an interesting group of people. It was one of those dinner parties that was both busy and noisy. “Noisy” in a good way, as multiple conversations happened simultaneously which made it great fun.

I’ve known the hosts (and one other person attending) since the early 90s, so there was a lot of reminiscence. We talked a lot about how much Wagga has changed. With the council elections coming up in a few weeks, we talked a bit about local politics. I learned about how one local figure had gone from extreme right to mainstream left.

We also chatted about old friends. I told them about how a former colleague had died a few years ago, and they told me about the circumstances surrounding the death of another old friend, Peter Batey. Peter had enjoyed a wonderful career in Australian theatre, and in “retirement” at nearby Coolac, had founded the “Bald Archy” satirical art prize which, I learned, will be returning in 2023.

“I have something for you, a memory of Peter” my friend said, packaging up some lovely little salt and pepper shakers he had once owned.

Earlier in the day, we had taken a trip to nearby Coolamon and Ganmain.

Coolamon is much changed from the town it once was. Coolamon is about thirty minutes drive from Wagga, and it was very much a “country town”. These days, there are gift shops, cafes and restaurants. “This feels like a place where people from Wagga might visit on the weekend”, I said to Sue.

And from there, we drove a further fifteen minutes to the town of Ganmain. For a number of years, my friend Kate had lived at nearby Matong, where she ran a farm, and worked in the arts. I shot a little video of the Haystack Visitors Centre which features Kate’s art work on the inside. The video also included the names of people from the times, including a brick featuring her son Tom. He was maybe 7 or 8 years old at the time, but is now fast approaching forty. Time flies.

And indeed it does. Before I knew it, it was time to leave to catch the train. I managed to remember to pack everything, except my coffee pot! That can stay there until the next time I visit Wagga.

The one thing I’m pleased I did remember was an artwork I purchased. Last weekend we went on the Wagga Wagga Art Trail, and were particularly impressed by the works of local print-maker, Craig Couzins.

There weren’t many people on the train, so I had four seats to myself, which allowed me to place the frame safely on the floor, and for me to relax comfortably on the overnight train back to Sydney.